Building inside a container

Builds can be done inside a Docker container, to make it easier to get a common, usable environment. The Docker daemon must be installed and running on your system. By default, images from alisw/<platform>-builder:latest will be used, e.g. alisw/slc8-builder:latest. They will be fetched if unavailable.

Reusing prebuilt tarballs saves compilation time, as common packages need not be rebuilt from scratch. rsync://, https://, b3:// and s3:// remote stores are recognised. Some of these require credentials: s3:// remotes require an ~/.s3cfg; b3:// remotes require AWS_ACCESS_KEY_ID and AWS_SECRET_ACCESS_KEY environment variables. A useful remote store is https://s3.cern.ch/swift/v1/alibuild-repo. It requires no credentials and provides tarballs for the most common supported architectures.

Cleaning up after building

It is possible to benefit from precompiled builds on every platform, provided that the server caching the builds is maintained by yourself. Since every build is stored as a tarball with a unique hash, it is sufficient to provide for a server or shared space where cached builds will be stored and made available to others.

In order to specify the cache store, use the option --remote-store <uri>, where <uri> can be:

The first four options can also be writable (if you have proper permissions): if you specify ::rw at the end of the URL, your builds will be cached there. This is normally what sysadmins do to precache builds: other users can simply use the same URL in read-only mode (no ::rw specified) to fetch the builds.

You need to make sure you have proper filesystem/SSH/rsync permissions of course.

It is also possible to specify a write store different from the read one by using the --write-store option.

aliBuild can reuse precompiled packages if they were built with a different tag, if that tag points to the same actual commit that you’re building now. (This is used for the nightly tags, as they are built from a branch named rc/nightly-YYYYMMDD, while alidist is updated to have a tag like nightly-YYYYMMDD instead, pointing to the same commit.) However, this reuse only works if the precompiled package has the same version as specified in your copy of alidist.

This approach assumes that tags don’t move (i.e. don’t change which commit they are tagging) in the repositories being built. If you administer a cache store, make sure to delete cached tarballs built using that tag if a tag is moved!

One of the use cases we want to cover is the ability to develop external packages without having to go through an commit - push - pull cycle.

In order to do so, you can simply checkout the package you want to develop at the same level as alibuild and alidist.

For example, if you want to build O2 while having the ability to modify ROOT, you can do the following:

The above will make sure the build will pick up your changes in the local directory.

As a cherry on the cake, in case your recipe does not require any environment, you can even do:

and it will correctly install everything in sw/<arch>/ROOT/latest. This of course mean that for each development package you might end up with one or more build directories which might increase the used disk space.

It’s also important to notice that if you use your own checkout of a package, you will not be able to write to any store and the generated tgz will be empty.

If you wish to temporary compile with the package as specified by alidist, you can use the --no-local <PACKAGE> option.

When developing locally using the development mode, if the external is well behaved and supports incremental building, it is possible to specify an incremental_recipe in the YAML preamble. Such a recipe will be used after the second time the build happens (to ensure that the non incremental parts of the build are done) and will be executed directly in $BUILDDIR, only recompiled what changed. Notice that if this is the case the incremental recipe will always be executed.

While alibuild does its best to find out which OS / distribution you are using, sometimes it might fail to do so, for example in the case you start using a new *buntu flavour or a bleeding edge version of Centos. In order to force the the correct architecture for the build you can use the --architecture (-a) flag with one of the supported options:

Very often one needs to run on a platform which is different from the one being used for development. The common use case is that development happens on a Mac while production runs on some older Linux distribution like SLC5 or SLC6. In order to improve the experience of cross platform development aliBuild now offers the ability to run in Docker via the --docker option. When it is specified the first part of the architecture will be used to construct the name of the docker container to be used for the build and the build itself will be performed inside that container. For example if you specify:

the build itself will happen inside the alisw/slc7-builder Docker container. Environment variables can be passed to docker by specifying them with the -e option. Extra volumes can be specified with the -v option using the same syntax used by Docker.

By default aliBuild is tuned to build the production version of ALICE Offline software, as deployed on the Grid, so some of the choices in terms of version of the packages and compilation flags are tweaked for that. For example, ROOT5 is used because that’s what is what has been validated for datataking and the choice will not change until the end of RUN2 of LHC. In order to change that and use, for example, a more recent version of ROOT you can use the --default root6 option which will enable ROOT6 based builds. For a more complete description of how defaults works please look at the reference manual.

You can optionally disable certain packages by specifying them as a comma separated list with the --disable option.

Moreover, starting from aliBuild 1.4.0, it will also be possible to disable packages by adding them to the disable keyword of your defaults file (see previous paragraph). See the defaults-o2.sh file for an example of how to disable AliEn-Runtime and AliRoot when passing --defaults o2.

Controlling which system packages are picked up

When compiling, there is a number of packages which can be picked up from the system, and only if they are not found, do not have their devel part installed, or they are not considered good enough they are recompiled from scratch. A typical example is things like autotools, zlib or cmake which should be available on a standard developer machine and we rebuild them as last resort. In certain cases, to ensure full compatibility on what is done in production it might be desirable to always pick up our own version of the tools. This can be done by passing the --no-system option to alibuild. On the other hand, there might be cases in which you want to pick up not only basic tools, but also advanced ones like ROOT, Geant4, or Pythia from the system, either to save time or because you have a pre-existing setup which you do not want to touch. In this case you can use --always-prefer-system option which will try very hard to reuse as many system packages as possible (always checking they are actually compatible with the one used in the recipe).

Whenever you build using a different recipe or set of sources, alibuild makes sure that all the dependent packages which might be affected by the change are rebuild, and it does so in a different directory. This can lead to the profiliferation of many build / installation directories, in particular while developing a recipe for a new package (e.g. a new generator).

subcommand which will do its best to clean up your build and installation area.

aliBuild is installed via pip. In order to upgrade it on most laptops (in particular Macs) do:

or in case you need to be root (e.g. on Ubuntu and most Linux distributions for convenience):

In general updating aliBuild is safe and it should never trigger a rebuild or break compilation of older versions of alidist (i.e. we do try to guarantee backward compatibility). In no case an update of aliBuild will result in the update of alidist, which users will have to be done separately. In case some yet to appear bug in alibuild will force us to rebuild a previously built area, this will be widely publicized and users will get a warning when running the command.

You can also upgrade / install a specific version of alibuild by specifying it on the command line. E.g.:

this is in particular required when you want to try out release candidates (rc) builds which are masked out by default.

Rebuilding packages from branches instead of tags

Generally, recipes specify a Git tag name in the tag: field. In some cases, branch names might be used instead (such as tag: master or tag: dev). In such a rare case, aliBuild needs to know what is the last branch commit to determine whether a rebuild is necessary.

Such check by default uses cached information instead of doing very slow queries to remote servers. This means that aliBuild is fast in determining which packages to build. However, packages using branch names might not get rebuilt as expected when new changes are pushed to those branches.

In this case, you can ask aliBuild to update cached branches information by adding the -u or --fetch-repos option. Note that by default this is not needed, it’s only for very special use cases (such as centralized builds and server-side pull request checks).

It is possible to generating a PDF with a dependency graph using the aliDeps tool. Assuming you run it from a directory containing alidist, and you have Graphviz installed on your system, you can simply run:

The example above generates a dependency graph for the package O2 using the defaults o2, and saving the results to a PDF file named graph.pdf. This is what the graph looks like: 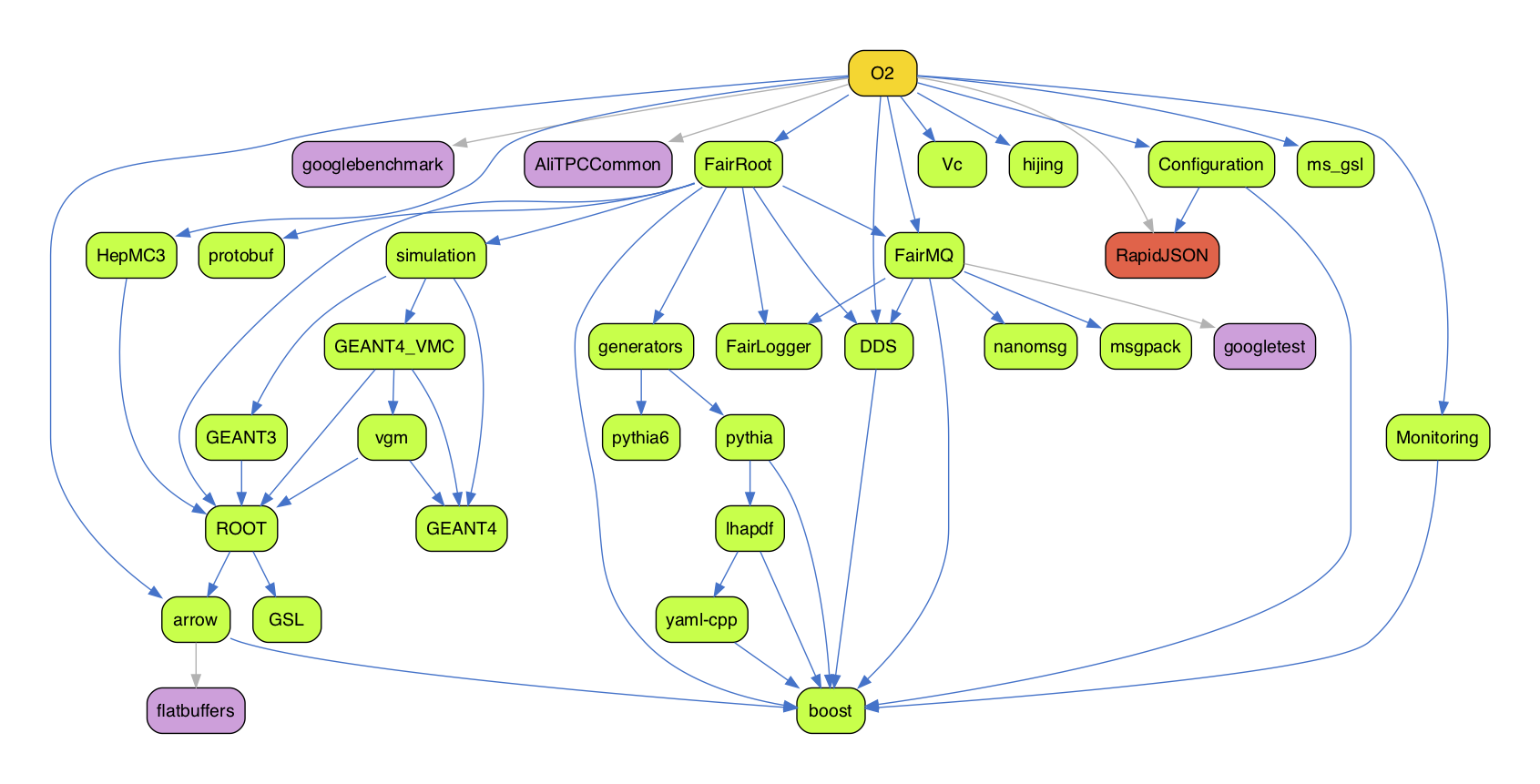 By default, aliDeps runs the usual system checks to exclude packages that can be taken from the system. If you want to display the full list of dependencies, you may want to use:

Using the packages you have built

Environment for packages built using aliBuild is managed by Environment Modules and the wrapper script alienv. To list the available packages you can do:

will enter a shell with the appropriate environment set. Note that loading a toplevel package recursively sets the environment for all its dependencies.

You can also execute a command with the proper environment without altering the current one. For instance:

To see other commands consult the online manual:

Environment Modules is required: the package is usually called environment-modules on Linux, or simply modules if using Homebrew on OSX.

Note that alienv works exactly like the one found on CVMFS, but for local packages built with aliBuild.

Some packages do not have a modulefile: this usually occurs for those which are not distributed on the Grid. If you think this is wrong feel free to submit a pull request or open an issue to the relevant packages.

It is still possible to load the environment by sourcing the init.sh file produced for each package under the etc/profile.d subdirectory. For instance: